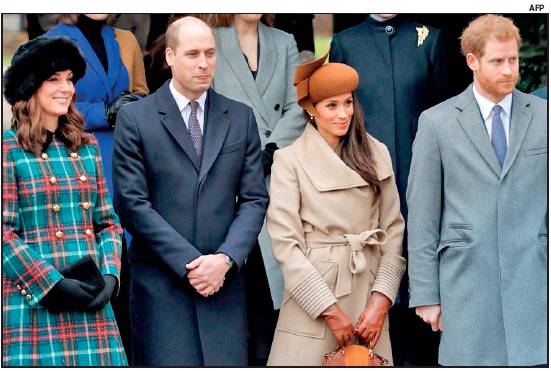 The above picture is printed in TOI today, is of Royal family of England. In the featured picture , from left Britain’s prince William and his wife Catherine, the rest two are Prince Harry and his fiancée Meghan Markle. I am surprised to find that William has gone bald, it has become all the more worrying because queen at her 91 years age is about to abdicate the throne in favour of her grandson, William, ignoring the immediate normal successor -her son, Charles. Harry’s is not yet that serious — none the less , prince Harry, also has started balding.  Dermatologists say by the time Harry will be marrying Markle, he will be a complete bald. In respect of looks , being bald is worse than hair greying, for, while the former makes one look ten years older than his actual age, the latter, is by seven years older. Prince William at the age of 33 looks like a 43 year old—of course, publicly he makes humour on his own baldness. On study of picture of his head over the years, it appears his hairs started thinning since 2002.

Class conscious English people respects, and is proud of its monarchy. Whatever happens in royal family, widely shared by English people, and also in  the world wherever English language has made its way into. Do you remember the living-days of Harry and William’s mother, Diana??  her personal life, disturbed married life, and finally sad death, shook the whole world in sorrow.

Similarly, William’s hair loss, baldness and resulting bad look is being widely discussed. It is a wonderful time for doctors for hair growing, dermatologists and their medicinal business.  There will be a spate of TV programs by people with business interests in medicine for hair growth. Soon a craze for transplants of hair will begin. Those are there in the beauty market already, but William’s new publicized baldness will boost their business. In the past, innumerable people spent a lot of money to grow hair on their bald head, experience is that it mostly do not work,  money is lost down the drain, it seems nobody usually have complaints about this as they spent it from the spare money that they have— clearly,  nobody has any expectation.

Harry and William’s baldness is too serious, it is genetically doubly loaded, because his father—Charles, and Grandfather—Philip, are both bald.  Diana’s father is also bald.  It is a two way attack on the head of two princes. Therefore, it is doubtful whether transplant of hair will benefit Williams. But he must try as he does not have dearth of wealth and influence, as soon as he want it, it will be already there for him.

But here in India all bald people is not that lucky.  In this not so rich country, all bald people, may not have so much money for transplants or other costly methods of hair restoration. Moreover, there is every chance of disappointment, firstly proven medicine will not be available, and secondly businesses will sell you medicines which they themselves know beforehand, will not work. Bald people has complexes in their thinking, often we see bald people or for whom the hair is thinning like that of Williams, comb remaining few hairs in a fashion desperately trying to cover unsuccessfully the bald part, some go for dying whatever few hairs are left .  Wigs also do not work for most people, but Amitava Bachhan’s one work quite nicely, his wigs looks quite natural.

I personally have different idea. For me even at 66 I am not bald at all, though my hair on the head is much thinner and receding than when it was  in my thirties, but in stark contrast, my brothers have gone bald. From childhood I am very fond of mustard oil, I have a habit of massaging my body and scalp with mustard oil regularly before going to bath. My other two brothers used instead, BRILLSCREAM and many other widely advertised hair tonics, result is that both gone bald  long back. I think in spite of there being hundreds of hair tonics in the market, mustard oil is the best. If you put mustard oil on your head and massage the scalp, chances are there you won’t get baldness–Ramdev Baba’s Patanjali brand will be the best, so far there has not been any scandle about him.  Prince William and Harry may try it to regrow their hair by massaging their scalp with mustard oil. I am very hopeful, it will work. When India’s Ayurveda, Hare Krishna, and meditation have benefited the western world, further addition into it of massaging mustard oil on the  scalp, won’t harm, and in all likely hood ,may stop hair loss , even regrow ,one demonstrate able proof is myself.

An online seller of books. Lives in Mumbai and Kolkata. View all posts by Your useful Books.